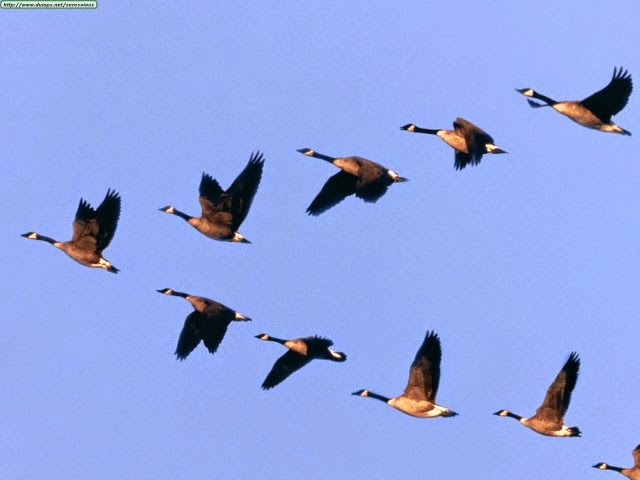 I stood gazing at the sky, listening to the morning songfest. The doves, robins, starlings and whoever else adds to the chorus. My pup was nosing around, sniffing out all the scents, deciphering who had been in our yard during the night.

The distinct sound of geese joined the cacaphony, becoming louder as they drew nearer. And then all at once they were overhead, soaring in their v-shape. I never tire of watching this aspect of God's creation. They fly as a unit;each with a job to do. A few at the apex glide, allowing several to move forward and take over the lead point. In moments the entire flock has changed leadership effortlessly in midflight.

This happens over and over again like a well tuned symphony. It never ceases to amaze me.

What if we could all work together that way? Perfect beat and harmony. What a wonderful world we would live in.

Those of us who follow Christ could learn a thing or two about working together. The flock interacts in such a way that no one bird tires out from the job of leading. What if those in leadership in a church body did that? More people would be allowed to share the load. Perhaps some would not be so possessive of their roles within the body.

Perhaps the world at large could learn that collaborating and not demanding our own ways would help the earth. Nobody would feel the need to possess another's space. You see, the geese know something we don't. When you're aloft there are no lines indicating boundaries between states or countries.

The One Who Gave His All 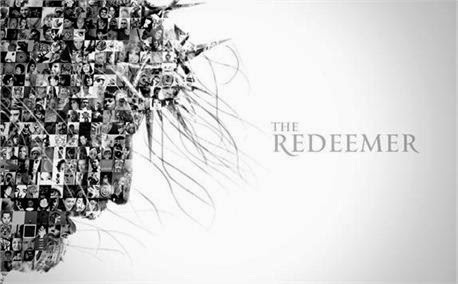 "But he was hurt because of us; he suffered so. Our wrongdoing wounded and crushed him. He endured the breaking that made us whole. The injuries he suffered became our healing. We all have wandered off, like shepherdless sheep, scattered by our aimless striving and endless pursuits; The Eternal One laid on him, this silent sufferer, the sins of us all."
~Isaiah 53:5-6   The Voice

"When the time was right, the Anointed One died for all of us who were far from God,
powerless, and weak. Now it is rare to find someone willing to die for an upright person, although it’s possible that someone may give up his life for one who is truly good. But think about this: while we were wasting our lives in sin, God revealed His powerful love to us in a tangible display—the Anointed One died for us."
~Romans 5:6-8   The Voice

Today (Maundy Thursday) marks the day that Christ was betrayed, condemned and on the morrow, was put to death.  Christians around the world celebrate  and remember through special services what Christ did for us. As horrific as it was to be crucified, it was the only way God could reconcile us to Him. Through Jesus’s blood shed for us, are we able to have an opportunity to choose  life over death.

The verses from Isaiah and Romans say it all.  May you ponder these words in your heart. I pray you will accept the free gift of eternal life if you haven’t already. Jesus paid the price for you!

My salvation and my significance depend ultimately on God; the core of my strength, my shelter, is in the True God.          Psalm 62:7  The Voice

I receive a daily scripture in my email box each day. This one spoke to me and I decided to share it with you. I like the wording of this verse. It is succinct in its meaning. There’s no pussy footing around.
It reminds us that our sole existence is dependent on God. He created us for His pleasure, not ours. When we think about it that way, it causes us to take the focus off ourselves and place it back where it belongs; God. It’s when we forget or push aside this concept in our lives that we begin to descend a slippery slope.
The attributed author of this psalm is King David. He is called a man after God’s own heart. He was, for the majority of his life. However, he let his heart drift away from his true passion (God) and chose to focus on something else, in this case, a woman. A married woman at that. But he was a king. He could have anything he wanted, or so he thought. He was, after all the king!
David sinned but repented, when confronted, and God was merciful and forgave him.
I have no clue if this was written before or after this episode in David’s life. However, it shows a man’s belief that his purpose in life depends upon God and only God.


Do you put your faith and whole being in God’s hands? If not, I pray you will search for Him.